Start a Wiki
Saki Morimi (森美 咲, Morimi Saki?) is in her last year in university. She is 21 years old, born on January 6, 1989. After her parents died she lived with her elder married sister, her sister's husband and their baby. She visited New York City as part of her graduation trip with her friends and after visiting Washington D.C. alone, she meets Akira Takizawa who helped her out when she threw a coin in the grounds of the White House and is questioned by the police. Since Akira was naked, she lend him her coat to cover himself up. After noticing that she left her passport in the coat, she follows him and then decides to go back with him to Tokyo, Japan.

She plans to work in the company her brother-in-law owns, because she is ashamed of living off their money. She could only go to college with the aid of her sister and her brother-in-law. It is also known that she is in love with Akira. And that the feelings are mutual.

Saki is the observer, not the main focus of the series.  As such she is very, well, observant. She takes great care to blend in and understand her surroundings and the mysteries around Akira. Saki is very sensitive to those she cares about, always willing to defend them, especially Akira.

Of course this also makes way for eventual disappointment and distress when she suspects that Akira is actually a terrorist.

Her awareness and empathy make her an approachable friend to the fellow members of Eden of the East, and she is usually the one that Akira goes to when he need support or when he's just having a good time. 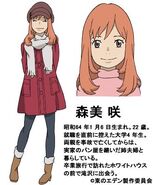 Retrieved from "https://edenoftheeast.fandom.com/wiki/Saki_Morimi?oldid=5537"
Community content is available under CC-BY-SA unless otherwise noted.